The beginning - how it all started 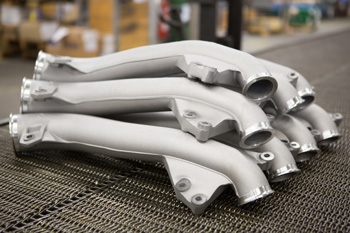 On the last day of the year, 31 December 1921, the company
EBÖ Metallgjuteri was registered in Eskilstuna. Behind
the company and the three letters in the company name,
were the manufacturers and brothers-in-law Johan Ruben
Eldin, Gunnar Boqvist and Karl Rudolf Gunnar Östlund.

ELDIN, BOQVIST AND ÖSTLUND. EBÖ
The foundry business began the next year in a rented property at Lilla Tvärgatan,
in the district of Östermalm. From the very beginning, aluminium was
used for casting simpler parts in sand moulds, and as one of the first metal
foundries in Sweden, EBÖ used fuel oil to heat the smelting furnaces.
Eventually, mould casting with cast iron moulds became the main
method - but initially people relied on more classic sand moulds.
When the company started, it mainly manufactured smaller suspension
fittings, such as hooks, balcony hangers and various types of knobs. The
product portfolio also included urns and pots, intended for flowers.

Die casting arrives on the scene

When machines for die casting were purchased for EBÖ from Italy in
1948, the first steps were taken towards what would later drive the
successful journey for the company - and also involve the move into the
heavy vehicle industry.
In 1948, die casting was a new method that required different types
of casting tools compared to mould casting, and the tools were also
more difficult to manufacture. But the great advantages of die casting
were on the material and efficiency side: metal consumption became
significantly lower and the casting process became faster.
During the mid-1960s, the demand for die-cast products increased.
EBÖ heeded the market and boosted its range of machinery with two
new machines from Germany. By this time, ASEA had become a major
customer in the die casting segment.
The journey towards vehicle-oriented customers continued in the
1970s. In 1970, EBÖ bought a used low-pressure casting machine to
be able to satisfy Husqvarna, AGA and Tunaverken with, among other
things, cylinder heads, lamp housings and rims.
Towards the end of the 1990s, the die-cast segment had increasingly
moved away from mould casting. Customers such as Volvo and Scania
pushed the demand for die-cast items to record highs.
At the time of writing, now that EBÖ has become IAC and the
company
is celebrating 100 years, all remaining mould casting has
been transferred to the Tartu plant in Estonia. The Swedish plants in
Gredby, Hultsfred, Ankarsrum and Tenhult are exclusively engaged in
die casting - where the majority of production takes place for the vehicle
giants Volvo, Scania, MAN and Daimler.